Getting used to going slow. We in the western world are so focused on productivity. But what does it really get us in the end? Faster to our death? More things for our relatives to get rid of once we’re gone? Why exactly do humans get bored if they aren’t productive? It is an inborn trait, or inherited?

I still don’t particularly like not feeling productive, but do think I’m getting an idea of how to deal with it. To not get angry at it. Because the day always ends, and a new one arises.

This week, despite rain, we got to go to the villages. This time backseat in the dala-dala, and yes your worst nightmare…someone had gas. Bosi and I were dying (of asphyxiation and laughter), video here.

But, I’m getting a pretty efficient one-word Swahili vocabulary: Yes (Ndiyo), No (Hapana), Right (Kulia), Left (Kushoto), Today (Leo), Tomorrow (Kesho). Here, there, stop, go. How are you? Your children? …Pretty amazing how one can get by on just a few words (is there a meaning in there, geez Melora, would you just stop with all that Piscean looking for significance in everything, and just BE J!).

Anyhoo, back to the story…

Started the week with a special training event for the Micro-Lending Committee at a nearby university. Bosi engaged a professor in financial management to give a lecture on savings, budgets and financial planning. What many of us grew up with being taught as basic life: if you want something, put aside money for it. Save $5 a day and guess what, at the end of the week you have $35, in a month 50. Unfortunately, I don’t think many Americans think that way anymore. If I want something I can buy it now with a credit card. Amazing how we’ve flipped it, in just a generation or two. God, I’m really starting to sound like my Dad, eh? But, here the average person would have no access to a credit card. Most make their money in the informal market. No taxes, but also no access to a bank. The women walked away scheming on how they needed to teach their whole group on savings. I was maybe able to plant the seed of moving away from micro-lending and starting a savings and loan approach. Meaning, instead of lending out a micro-loan over and over, slowly losing capital to defaulters, what if the women built up their own capital via savings, and then lent that out to each other? What CARE formalized in Niger in 1991 and has now gone worldwide. Who knows, but did arrange a meeting with the CARE Country Manager and the TATU CEO next week. Think most of you know, I worked at CARE in Haiti and Cote d’Ivoire, still a client. It was so fun to see the ladies, Suzanna of the Bike Shop, MLC Chairperson, Miriam, along with MLC Treasurer, Aisha, who wore their best dresses and grinned like school girls to be at a University…well, I guess they were schoolgirls for a day! According to the Prof, the university has 10,000 students, the majority from neighboring countries: Uganda, Kenya, Rwanda and Botswana. It is the largest business oriented college in the region. Neat as a pin. 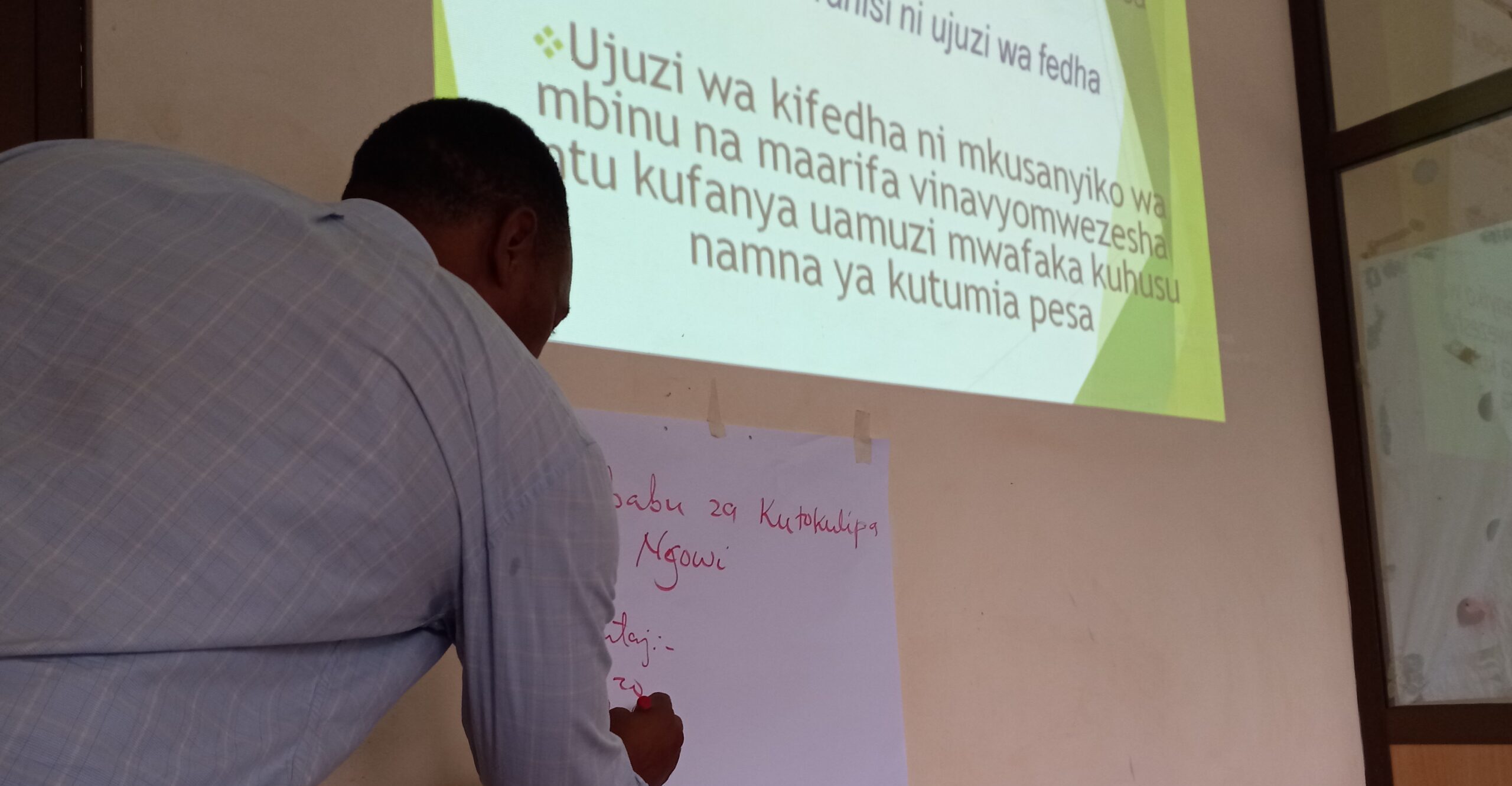 Then, a quick peek at the newly restocked Wholesale Shop! They have already sold out of their top seller, cement. Seems they are the only to sell it in the hood. They did a market survey awhile back to determine what was needed in the villages, and this was requested, guess they got it right! So, a new order has been place. They also sell basic household products: rice, soap, matches and water and sodas. A big thank you to those who donated to my fund of which some was used to purchase new stock. And dad, who gave some more, how they are buying more cement, see Dad I always said you concretized things so well J!

Next, the weekly meeting of the Bike Shop. We asked them to reflect on a series of questions about the project and the intended exit strategy. All done under a meeting tree. They then talked amongst themselves and came back to us with their thoughts. I’ll leave the details out, but the overlying feedback was, “we have learned that we are capable. We can do things men say we can’t, fix bikes, run a business, make a profit. We can stand up for ourselves”. I’ve joyfully seen and heard this in other places where women are still marginalized. Where men take an opportunity to earn a little money and then use it to buy beer, women earn as much as they can and give back to teach other and their families. How did so many cultures evolve to marginalize women? Because when given capacity they invariably contribute to that culture? Why are women still seen as inferior even in developed countries? There are actually some concrete answers I read in a book long ago, The Chalice and the Blade, worth a read. Such an honor to be amongst them.

Then, a weekend sojourn to Ngorongoro Crater!! Wow, wow and triple wow!! As a colleague said, when you first stand on the rim and look over the vast basin, it almost makes you cry. Not only is it stunningly beautiful, but also home of some of the first humans, right next to Olduvia Gorge. An ancient volcanic crater, actually a caldera, according to Wiki, “the world's largest inactive, intact and unfilled volcanic caldera, the crater, which formed when a large volcano exploded and collapsed on itself two to three million years ago, is 2,000 feet deep and its floor covers 100 square miles. Estimates of the height of the original volcano range are from 14,800 to 19,000 feet high. The Ngorongoro volcano was active from about 2.45 to 2 million years ago”. It is now home to approximately 20 different species, elephants, rhinos, hippos, lions, jackals, hyenas, wildebeests, flamencos, all kinds of birds, cheetahs and leopards … I saw ALL of them, accept a leopard and cheetah, they hang out in the higher, forested parts which were blocked off for road work. Some within 20 feet, others 50-100! Accept for lions, which I saw with binoculars (a friend did get on their telephoto camera, will send when I can). I organized the safari (Swahili for voyage) for my flatmates and David flew in from nearby Ethiopia and we had a private tour of the park. David and I stayed in a gorgeous lodge just on the rim, but the mates (all students and staying in a lesser priced hostel) joined us on Saturday night for my 60th birthday party. OMG can you believe it, 6-0! But, what an amazing way to kick-off the next decade of life!! Had a cake (only 2 candles thank God!) and South African sparkling wine (not bad!) with new friends, and old!

What more can I say.