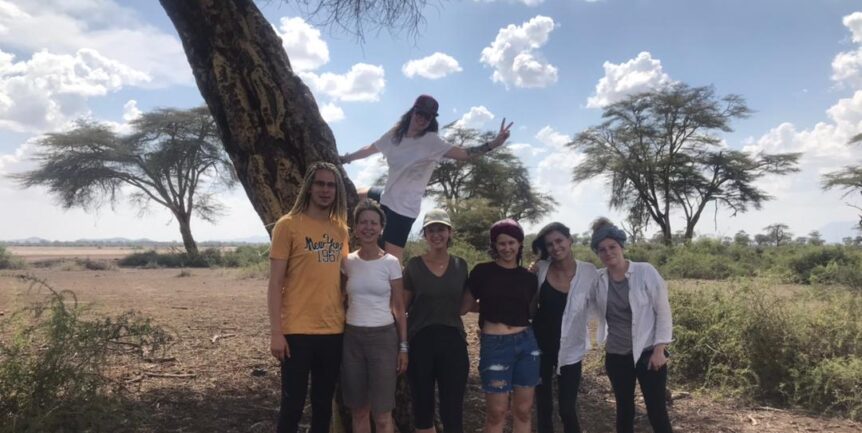 OMG, this is my last week with TATU!!

I knew that with hindsight it would all go so fast, and even though there were many moments I was like, ugh, I’m done with this, I’m sad to be done with this.

Last weekend was another excursion to Enduiment Park (sp?). It’s a little visited park, and one can see why, not a very well organized park entry, much cheaper (got to give it to the Tanzanian Government they have recognized the economic value of tourism with 30% of the country protected as national parks. And, foreigners pay a hefty fee to visit them, $80-100/day – residents pay much less), and a longer drive to get there than anticipated but, we had the place to ourselves. And, unlike in other parks, we could get out and actually walk. We, being I and some of my flat mates plus 4 young Austrians who are here volunteering for another organization.

The park is on the west side of Mt. Kili so a much dryer climate. Low lying trees and shrubs across vast patches of rough sand. Took a good drive in, but did finally see some giraffes, then a lot of them. Clearly an animal able to adapt to differing venues. We saw some baboons, also a bit different than the forest variety, and some ostriches. Unfortunately, didn’t catch any elephants, but did cross some fresh trucks and manure, and found a skeleton, long ago bleached by the sun. And I glorious view of the backside of Mt. Kilimanjaro on the return.

The week was spent finishing my bike lady stories, I interviewed the last one, Martha, a Maasai and quiet, unassuming woman my age. The Masaai are sort of our Native Americans, the original peoples of this land. It has been interesting to better understand their culture and put the conflict of their older traditions to modernization into new light. There is a big dispute here as the government is trying to take ownership of some of their native lands, to which at first I felt inclined to protest against. However, in visiting several national parks and speaking to rangers, I understand that the purpose, although yes, as park land they become an income generating source, it also means the protection of natural habitats. And, although the Maasai have been respectful of the land which they have roamed for hundreds of years, their source of wealth and status is domesticated cattle and goats, who are not native to the land and have taken over grazing pastures for indigenous species such as water buffalo, elephants and giraffe.

In another example, although the Maasai are a very peaceful and communal people, they still practice polygamy, child marriage and FGM, which are exploitive and harmful to women. Yet, when I speak to Martha, despite the hardships these practices have caused her, at the same time one can see the strength that her strong identity as a Maasai, her sense of community and care that she feels, is in contrast to the underlying separateness I see in other communities here, and very much so in western culture. How much I am learning about there always being two sides to a story with the truth being somewhere in the middle. If only we could find a way to live peacefully in the in between.

But, like with all things, scratch the surface and we find diamonds underneath! Martha was indeed that, a strong woman that is finding her balance. Taking the parts of her identity that bring value, and working to change those which are archaic and harmful. She reminds me that I need to keep up the fight and always seek to make things better and equitable for all…that is what the Universe expects from us. I’ll be sharing my stories soon.

Then this weekend, I went to Kiruani, a village about 30 miles away from and even smaller than Msitu we Tembo. The bike ladies held an event to launch a new mobile bike rental program there. We took 20+ bikes and welcomed villagers to try them out and take out contracts. We didn’t get as many clients as hoped for, mostly because the need is more for 1-day rentals and the shop itself is too far away to support that. But, the ladies did get a lot of interest and the village elder, i.e. Mayor, was very open to loaning out a room in the village office that the ladies could keep a few bikes and then travel 2-3 times per week to support shorter term rentals. Who knows, if that goes well, the program could be expanded to other outlying villages.

So, this is the end… I’m leaving with very mixed emotions. I am forever tied to these women and will continue to support them long distance. Yet, I’m ready for hot showers with pressure, machine washed clothes and green leafy vegetables. It’s hard to think that I might never come back, but something tells me I will. It’s halfway across the planet and a long flight, but would love to see the bike ladies again. So, thinkin’… I still want to come visit David in Ethiopia in 2023, so maybe a quick hop to TZ is in order, alas, we’ll see.

From here, I’m going to Zanzibar for a week. An island just off the coast, in the Indian Ocean. Developed by Arab merchants in the 13th and 14th century, there still is a strong Arabic influence on the culture and architecture. Rented a thatched hut on the beach with my only intention being to rise to the sounds of the ocean and a few laps in the sea. Read a book, drink fresh fruit juices (and maybe some local Konyagi J), watch the sunsets, then get up and do it all over again. Then 4 days in Nairobi with my friend Wambui to meet her new baby boy, then the long haul home. Not enough funds to stop in Paris, so straight shot through Frankfurt to Denver and ABQ. I’ll do another update on the way! Home mid-April.